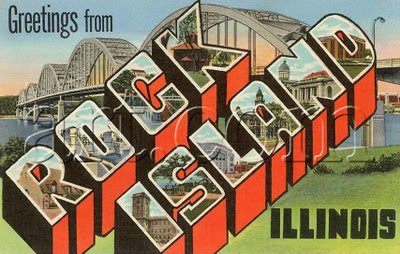 So this past weekend was my class reunion. It was actually kind of fun catching up with classmates, but really, it was little more than an epic power struggle. "What are you doing now?" was the most-heard question of the night, and everyone did their best to pull the polite one-up. I was no exception. "I DJ at a nightclub." Powerful. "And I'm also a newspaper columnist." Ooh, mega-powerful. But over the past week, I learned a lesson about what's REALLY powerful in life. I just had to lose power first.

I'm proud to be a Rock Islander. I know, I know -- I'm not the kind of guy to normally take civic pride in my community. I'm far more comfortable hiding in corners and taking sarcastic potshots at people and places. But too many people think of Rock Island as the ugly duckling of the Quad Cities, and it's high time somebody stood up for the old gal.

I live in an apartment complex halfway up the Rock Island hill. It's a neighborhood that some of you might not think the best, but I call it home. When I first moved into my complex in 1991, it was full of Augie students and an array of friendly townfolk. For a financially struggling college student, it was heaven. Low rent, nice people, and a fairly decent roof over my head. But a couple years later, my complex was sold.

Over the following years, we watched as our place took a nosedive. Maintenance took a back seat to money, and tenant screening became loose at best. As neighbor after neighbor reached their fill and moved out, I stuck it out -- primarily out of laziness.

Two years ago, the owner of our complex passed away unexpectedly. Since then, control of our place has been held up in a dizzying array of ligitation and estate sales. Meanwhile, we've endured a constant parade of appointed property managers. Each would come in with great fanfare and rhetoric of "changing things around," only to find a tight budget and the fiscal inability to do much. Some stayed months, others mere weeks. Routinely, I had to stroll out to the bulletin board just to keep track of who to make my rent check out to.

So when news reached us that our place had been sold to a developer in California, it was met with an array of indifference. Once again, a new property manager showed up talking great change. His name was Bruce Osterhaus, and at the time, I couldn't have cared less. I had already made up my mind that the summer of '08 would be my last in this complex.

I was touring condos and talking to realtors when I began to notice something. I started seeing Bruce a LOT. Since taking over, the guy and his team were on the grounds nearly every day. Vacant apartments have been gutted and refurbished. Flowers planted, problem tenants evicted, junked cars towed, security cameras installed.

I put my move on hold. Why not give this guy a chance? I like my neighbors, I like my apartment, and I like Rock Island. Maybe things are finally beginning to chaPFFFFFFFFFFFT.

That was the moment last week when the power went out -- and stayed out for five days. Now, I won't dare cry about last week, because I know a LOT of you had it far worse. At least I had hot running water and no tree damage, and for that I'm thankful. Still, four days in a dark, 95 degree apartment was no picnic, and I turned into a huge whiner. Then I realized that the 47 other tenants in my complex were probably whining, too, and I started to feel bad for our new friend Bruce. Any other manager would've told us to complain to the power company and leave us be. Not Bruce.

From dusk 'til dawn each night, Bruce maintained a solo vigil in our parking lot. By the headlights of his pickup truck, he kept an eye on things and helped us make our way through the pitch black hallways. When I got home after the second powerless day, Bruce was there with a portable generator, keeping one of our laundry rooms powered and turning a vacant apartment into an air conditioned oasis for the neighbor kids to cool down and play video games. I honestly don't believe the man caught more than a catnap for 3 days.

On Thursday, I came home at wit's end to a still darkened Rock Island. As I got out of my car, Bruce came up with a smile and said, "I hope you're hungry." Our new owner had sprung for a massive parking lot feast of chicken, cole slaw, potato salad, pop & juice, the works. And when we'd had our fill, Bruce packed the leftovers up and drove them to a local homeless shelter.

To you, it might just seem neighborly. But for THIS neighborhood, it was nothing shy of heroic. For the first time in 17 years, I have hope for the future of my apartment complex. In the coming days, we've been told to expect lights for the lot, new washers and dryers, and even vending machines.

Real power doesn't come from a line on a pole or from bragging rights at a class reunion. Real power comes from FRIENDSHIP, be it the new ones forged with neighbors over a chicken drumstick, or the old friends who called repeatedly offering helping hands and places to stay. Real power comes from COMMUNITY, which my town is bursting with. I'm proud to be a Rock Islander.
Posted by -shane- at 8/07/2008 1 comment: 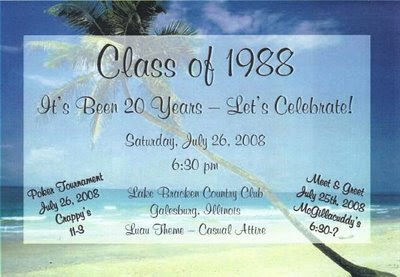 I'm in no mindframe to write a column. I hate to break it to you, Quad Cities, but your heroic writer is little more than a basket case this week. I've got a bit of a situation coming up, and I fess that I'm not handling it well. I'd like to pretend that I'm a perfectly cool cat under pressure, but based on the nervous habits I've got on display as I type this very sentence, not so much.

Let's see -- chewed pen cap firmly wedged in mouth? You betcha. Nails bitten down to the nubs? Yep. Fingers incessantly tapping on the table? Sure thing. The potential energy that could be harnessed from my neurotically shaking and jittery left leg might perhaps solve the global energy crisis. I sit before you a poster boy for Prozac. And all because I'm a huge dork.

You see, this weekend is my 20-year high school class reunion. And I'm not just attending, no siree. I absent-mindedly volunteered to DJ the thing. Five years ago, at my 15-year reunion, the DJ they hired, well, sucked. And stupid me decides to go up to our class president and start babbling. "You should just let me DJ the next one." "Sure, I'd love to do it. It'll be fun." The 37-year-old in me wants to go back in time and throttle the 32-year-old in me. WHY did I say such a stupid thing?

I suppose some people look forward to their high school reunions. Heck, even I've got to admit that the concept sounds pretty good in theory. You come back to your hometown. You see your old friends. You find out who got fat (me,) who got bald (thankfully NOT me,) and who ended up with the homecoming queen. Now personally, I'd take my current girlfriend over any ol' homecoming queen, but still, do I want to subject her to a group of people whose fuzzy memories are of King Dork Shane, the Nerdtastic Boychild?

Don't get me wrong. While it's true that the high school me was pretty lame, I wasn't exactly a social leper. I had a clique of friends who I got on with fabulously. We had a blast at our 15 year reunion. But of that entire clique, the population that will be in attendance at THIS reunion is precisely: me.

Brian's off living in Tokyo now with his Japanese wife. Steve's a family guy with too many commitments to make it. Mark and Jean have seemingly dropped off the planet. That leaves my old best friend, Bruce, who wanted to make it but couldn't swing travel plans in the end. It's a real shame, too, because Bruce came out of the closet a few years back, and the looks on everyone's faces were he to strut through the doors with his boyfriend on his arm might have made the whole night worthwhile.

That leaves me facing a room full of fringe friends, awkward small talk, and a bunch of guys who would still probably pick me last for flag football teams to this day. Can't wait.

Even more disturbing is the fact that I won't be able to escape if it gets particularly oppressive, since I'll be chained to a DJ booth all night. I've been trying to psyche myself up for it all week. I've DJ'ed at clubs, parties, and raves for over 20 years now. I think I can handle a little one-night get-together of some classmates, right?

One question, though -- what on Earth do 37-year-olds dance to these days? I spend my weekends spinning records to the 20-somethings in the District, and I've got their playlists down pat. But something tells me a room full of aging Galesburgers might not necessarily want to get all crunk up in this bizatch, if you know what I mean.

In preparing for this weekend, I downloaded a list of the biggest songs of 1988. Boy, did we listen to some baaaad music. Lisa Lisa & Cult Jam, "Head to Toe"? Does ANYONE on Earth want to hear that song ever again? "Mercedes Boy" by Pebbles? "Dirty Diana"? Al B. Sure? Rick Astley? Wow, did we have awful taste.

So I'm not really sure what to play, and there's a chance that I'm days away from yet again making a fool out of myself in full frontal view of the entire Class of '88. But after sitting here thinking about it, I've come to a brilliant realization: WHO CARES?

Let's say I go down there, play all the wrong music, and tick everyone off. Big deal. They're just people I went to school with. I don't care if they grew up to be doctors, or lawyers... or, in my case, a multi-millionaire philanthropist and crime-fighter. Well, I had to find SOMETHING to do after my years as a male supermodel and part time Tibetan freedom fighter. I mean, the view from the summit of Everest gets a little stale after you've seen it two or three times.

Yes, if there's one thing I learned from my years dating Kate Moss, it's this: Just be yourself. I don't need to make up stories or impress people. I'm just everyday average Shane Brown, retired astronaut and international spy.

There's one other thing I learned, too, but in my current capacity as Exective Vice Undersecretary to the President Pro Tem of the Senate, I'm afraid that's classified. Hopefully my classmates will understand.
Posted by -shane- at 8/07/2008 No comments: