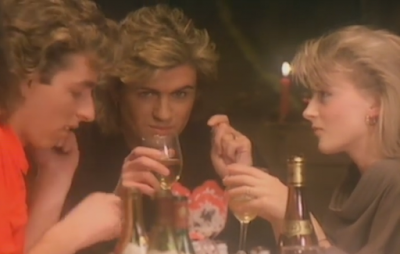 Some of you are probably used to coming to this page every Monday for a light-hearted dose of cats, laughter, and warm fuzzies. That won't be happening today. Not when there are wrongs to be righted. When one signs up to be a pretend journalist, one has to carry some pretend responsibilities.

We must temporarily put frivolity aside. There is an evil that needs to be addressed. A scourge has plagued our fragile earth for far too many years, and it's high time someone did something about it.

I speak, of course, about the song "Last Christmas" by 80's popsters Wham! (For our much older or much younger readers, I'm not trying to yell at you -- the band adds the exclamation mark on their own. It's not Wham. It's Wham!

How on Earth did a song as insipid and uninspired as "Last Christmas" become a holiday classic? I bet even Wham! would have doubled over laughing back in 1984 if you'd have told them their song would become a yuletide staple for decades to come. I didn't get the appeal in '84, and I sure don't get it now.

I'm not the only one. There are many great timewasters on the internet, but none as crucial to holiday survival as Whamageddon. The objective is simple: Ride out the holidays as long as possible without hearing "Last Christmas." If you make it (which you won't,) you win (you won't.) When "Last Christmas" eventually sneaks up on you, you confess via social media with the hashtag #whamageddon and your face will appear on the memorial Whamhalla webpage as a victim of the "Last Christmas" menace.

I thought I was gonna make it this year, I really did. I avoided the radio, shopping malls, and even any overly-bubbly people who looked like they could be George Michael fans. No Wham! would come to me this holiday season, I was sure of it. Then I went to a trivia night with a Name That Tune category and wham, there it was. #Whamageddon.

But being forced to listen to "Last Christmas" opened a new door for me. I've always hated the song, sure. But until now, I'd never really paid attention to how DUMB the lyrics are. Trust me, now we can all hate "Last Christmas" in new and exciting ways. Let's dive in, shall we? The song starts right on the chorus, which is fine, because it's all that matters:

"Last Christmas I gave you my heart,
But the very next day, you gave it away."

Right away, this is clearly a Yuletide tragedy, which should immediately disqualify it from holiday playlists. Christmas songs should be merry, joyful, and not mention failed relationships. As we should all agree, the only acceptable tragic Christmas song is that sole cautionary tale about reindeers murdering a hapless grandmother.

In 1984, George Michael was one of the biggest pop stars on the planet. He was clearly worth millions -- but all he gave his signifigant other was his lousy heart? It's no wonder his beloved walked away the next day. Let's be realists here: If all Mariah Carey got for Christmas was you, there'd be hell to pay. I'm just sayin'.

This person walked away from him THE VERY NEXT DAY? On December 26th? That's kinda cold. "Thanks for the presents and the ham and the cookies and, umm, your HEART and all, but I'm out. See ya!" For someone who just got a free heart, that's pretty heartless.

"The very next day, you gave it away." Following the rules of English grammar, "it" would still be referring to George's heart. So this person took George's heart and gave it away. To WHOM, exactly? A stranger? A store return? You can't give away someone else's heart. Does this mean George is now contractually obligated to love whomever his heart was transferred to? This makes no sense at all -- but then the mystery deepens:

"This year, to save me from tears,
I'll give it to someone special."

Somehow, between last Christmas and this Christmas, George got his heart back. Was it returned to him? Did he have to go buy it back from the third party owner? These are the questions that keep me up at night, people.

I thought the music video might yield some clues, but no. It tells the story of a Wham! Christmas, wherein George and Andrew and an assortment of background Whammers all gather together at a ski lodge, decorate a tree, and then there's an odd 20-second clip of everyone sitting around like they're bummed to be spending Christmas in the Alps with pop icons. In the beginning, George is walking with a brunette, but by the end, she's arm-in-arm with Andrew, so maybe she gave George's heart to Andrew? (Which, admittedly, could explain some things.) It makes as little sense as the song and I think was just Wham! taking a ski vacation on their record company's dime.

Every year, dozens of Christmas records get released. MAYBE one song per decade becomes a timeless classic. Perhaps "Last Christmas" was simply the best the 80s had to offer. I suppose I should be thankful we never got "Have A Devo Christmas" or heard A Flock of Seagulls try to cover "O Tannembaun."

Oh, who am I kidding? I would have LOVED "Have a Devo Christmas." Have a great holiday, and remember: Keep your heart to yourself or someone might just give it to me, and I'm not sellin'.
Posted by -shane- at 1/02/2018 No comments: 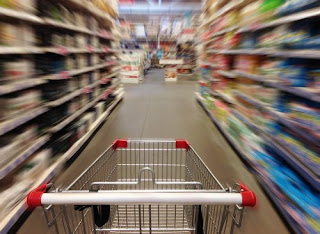 This was hard for me to come to terms with. I've always gotten a strange satisfaction from doing my own grocery shopping. As kids, we all had to wander from aisle to aisle with our parents while THEY decided what food we should eat. This was probably for the best, because if I had a say in the matter back then, we'd be wheeling out a cart full of Tombstone pizzas and little else.

But now I'm older and wiser and supposedly control my own destiny. And I'm proud to say that I usually exit the store with one, maybe two Tombstone pizzas at the most. Sometimes I even leave with things that are green and taste icky. When I'm at the grocery store, I legit feel like a responsible adult. Too bad I'm really lousy at adulting.

For a week straight, I had become addicted to eating Thanksgiving leftovers straight from the fridge. But like every year, there comes a point when you literally have to quit cold turkey. That's how I found myself once again navigating the aisles of my nearby grocery store, full of holiday spirit (or maybe just the last of the turkey) and maybe even a little spring in my otherwise wintery step. Nothing could stop this responsible do-gooder from adulting away.

And then I got to the second aisle. That's when I spotted a hapless woman in need of assistance. For me, spotting her was an achievement in and of itself. Usually when I'm wandering about on my own, my mind is Walter-Mitty'ed away in countless directions. Sometimes I'm writing this very column in my head. Sometimes I'm working on a new dance mix. Sometimes I'm trying to remember the ingredients for some random recipe. If life were a Youtube video, I'd be the clueless guy everyone yells at while the typhoon wave bears down behind me.

But it was clear this woman needed some help. She was a fairly short thing, and she was jumping in desperation to reach something on the top shelf. I'm a relatively useless human being, but at least I'm kinda sorta tall-ish. THIS I could handle.

"Hi," I said, all full of good deed warm fuzzies, "Can I reach something for you?"

That's when she turned to me... and shrieked. Note: It was NOT a shriek of adulation, thanks, or joy.

I'm a self-aware human being. By traditional standards of beauty, I'll probably never make it as a supermodel. But I never thought I was so ugly that the mere sight of my monstrous visage would elicit screams of terror and panic. Apparently I was wrong.

"GET AWAY!!!!!" she screamed insanely like an insane person suffering from insanity. "YOU SCARED ME! AAAAAAA! GET AWAY, [EXPLETIVE]!"

Trust me, I wanted nothing more than to get away from Screamy McCrazypants. But naturally by then, people were now RUNNING to the aid of this woman whom it sounded like I was murdering. All I could do was back off and sheepishly try to explain to a growing mob of townspeople that I was trying to help her reach her groceries. Of course, the only thing the news has taught us this month is that there's a better than average chance that every man you've ever known is secretly a deviant sex monster. So I left to another aisle and spent the rest of my shopping experience being glared at by strangers giving me sideeye while clutching their children tight as I passed by.

But they probably had good reason to. As it turns out, I might just be a deviant sex monster after all. I learned this on aisle 7, when music suddenly began blaring out of my crotch. I had made a shopping list on my phone, but I put the phone away before it had locked, and now I had just pocked-opened one of a dozen music apps.

My phone also does this nifty little trick where it completely freezes for up to five minutes without any buttons working -- which meant I couldn't shut it off.

As many of you know, I moonlight as a DJ, which means I need handy access to all the popular songs, including the current wave of vulgar mumble-rap that's dominating the charts. I wish I could tell you the words to the song that was screaming from my crotch, but that's a no-go in a family paper. Let's just say that the vocalist was expressing his immediate and urgent desire for physical intimacy -- by dropping the F-bomb some 26 times before I was able to run out of the store.

There are many lessons to be learned here. (1) In the future, should you require the aid of your fellow man and all you see approaching is Dispatch-Argus columnist Shane Brown, keep looking because he will NOT stop. You could be a screamer. (2) There is NO appropriate time for Post Malone to start playing out of your pants. I've tried. (3) I need a new phone. (4) Next time, I'm going straight for the Tombstone pizzas and leaving.
Posted by -shane- at 1/02/2018 No comments: