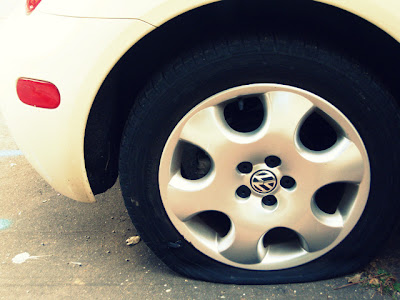 Occasionally there are times in life when it's fun to prove your intellectual worth. For some of you, maybe this means that you secretly write poetry or listen to political radio. In my case, it's more of a trivial pursuit.

If you guys have ever seen me out and about, there's a good chance that it's happened at a local trivia night fundraiser. It's the only place where my shameful lack of life skills is trumped by my even more shameful mastery of pop culture. I can't solve a math problem, answer a history question, or perform most basic life functions, but what's that you say? You need someone to complete the following Bon Jovi lyric? Sadly, I'm your guy.

So I get a kick out of trivia events, and that's where I was Saturday night: bringing home victory at the Leclaire Civic Center. The win put me in such a great mood on the way back to my weekend DJ gig that I almost didn't notice the noise at first.

This was when I noticed that the THUMPITY THUMP was being accompanied by a SHAKITY SHAKE of the steering wheel. I was pretty sure this wasn't normal behavior for a Volkswaaaaaaaaaa!

And that was the precise moment when my left rear tire went ker-blooey along a lonely stretch of Highway 67 at 10:30 p.m. on a Saturday night.

Occasionally there are times in life when it's fun to prove your intellectual worth. Changing a tire is NOT one of them. I took a deep breath, counted my blessings, and formulated a two-part emergency response action plan. Step one was to kick the car. Step two was to hurl enough expletives to officially make this story NC-17.

If only I knew someone in the vicinity with the brawn and the manpower to sort this situation out. Someone macho enough to take control and replace the tire with gusto and brute strength.

It turns out I did. Her name is Tami.

Tami is a fellow trivia player, and she was only a few yards ahead on 67 when the tire blew. I called her up and she turned around to rescue me. In the meantime, I fumbled around and found the phone number to roadside assistance.

"Are you in a safe location?" asked my "friendly" help-line representative.

"Well, as safe as the middle of nowhere can be," I reckoned. Based on the creepy dark nature that surrounded the car, it was anybody's guess. There was a rustle in the nearby bushes. If I had to guess, I was pretty sure it was a were-zombie. "But hurry."

Five minutes later, my phone rang back. It was HAL from 2001: A Space Odyssey.

"hello." said the unemotive robo-voice. "this. is. the. automated. insurance. helpline. roadside. assistance. is. now. being. dispatched. to. your. vehicle. and. should. arrive. in. FIFTY. minutes. thank. you. good. bye."

Fifty minutes at the intersection of Creepy St. & Were-Zombie Avenue? No thank you. Plus I was envisioning a restless group of tipsy 20-somethings milling about on a silent dancefloor. NOT cool.

That's when Tami spoke up. "Do you have a manual for this thing?" We had a look-see.

Okay, it wasn't in German. But it might as well have been. Instead, it was diagram after diagram of things that looked like neither my car OR my tire. But it kinda made sense. We pulled the spare out of the trunk and tried to follow along.

Eventually we pried the thing off and went to the next step, which was to loosen the lug nuts. Now, like I said, the manual was full of helpful diagrams, but not one of them showed me standing on top of the socket wrench, jumping up and down, and yelling "ungh" -- but that's what it took to loosen those puppies. Eventually we got the car jacked up and the tire off.

It was about this time when Amy rolled up. Now, Amy's the oft-discussed person in my life who, depending on press time, the current barometric pressure, and the positioning of Jupiter in the evening sky, may or may not be my girlfriend. (It's a loooong story. Suffice to say we break up worse than we date.) I'd called her earlier, and was expecting her to arrive and marvel at my tire-changing ability. The comically shocked look on her face said otherwise.

I was beaming with pride and teamwork and accomplishment at my fortitude and intuitiveness. But when Amy pulled up, there I stood, flashlight in hand, barking out steps from a manual, while Tami was on her hands and knees, covered in grime and lug nuts, effectively doing 90% of the work. I told you I had a shameful lack of life skills. But if she were ever in a crisis situation where she needed an emergency DJ set and/or newspaper column, I'd be there for her in a heartbeat.

Eventually, we got the tire changed and I was able to cancel the roadside assistance with five proud minutes to spare. And those tipsy 20-somethings? They barely noticed that I was 15 minutes late to the gig, and I was able to salvage some of my dignity by keeping the dancefloor hopping til the wee hours.

I can't possibly thank Tami enough, so instead I'll endorse her. She's a massage therapist who owns TEC Bodyworks on Tech Drive in Bettendorf. If she can handle a bad back half as good as she handled a bad tire, you'll be in good hands. As for me? Let's just say next time I'm at a trivia night and a question about tires comes up, I'll be the go-to guy who knows the right go-to girl.
Posted by -shane- at 8/31/2009