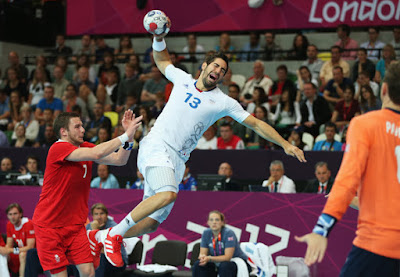 You want me to write a column? NOW? You can't be serious. I'm a little busy -- the Olympics are on (duh.)

Like most of you, I'm a little preoccupied enjoying these two infrequent weeks when we, as a nation, come together and really, truly care about swimming. Days from now, I won't give swimming a second thought until 2020. I don't even know HOW to swim. Yet here I've sat, night after night, cheering on the very sort of intimidating jocks I once feared in high school.

It's easy to enjoy competitive swimming, though, when our country seems preternaturally amazeballs at it. Some of these swimmers look to have more muscle strength in their shoulders than I do in my whole body -- and that's just the GIRLS. I'm pretty sure Michael Phelps or Ryan Lochte could pick me up and throw me like a gelatinous shot put if they felt like it.

I don't even understand how one goes about commanding their body to do these tasks. Take gymnastics, for instance. I guarantee I couldn't even stand up straight on a balance beam without tumbling to my near death, let alone jump and twirl and flip and such. Obviously gymnasts are physical powerhouses who've spent years honing their bodies into fat-free balancing machines, whereas I can't seem to take my trash out without risk of ankle breakage.

But let's pretend for a second that I was in peak physical condition. Let's say that instead of this fat gut, I had abs of steel and muscles I didn't even know about. Even I were physically capable of the act, I still don't understand how you can tell your body, "Okay, this time when you jump on the big spring, I'm gonna need you to do two somersaults and something called a half pike twist, 'kay? Oh, yeah, and be sure to stick the landing." My brain would just start laughing at me. Maybe I'm defective.

I've found that it's easy to root for Team USA AND at the same time feel just a little bad for yourself. I've now watched kids half my age wearing newly acquired jewelry as proof that they're the best athletes in the world. I've had twice their time on Earth and I've never been the best of anything (though if they ever introduced the sport of competitive procrastination, I might be in that medal hunt.) It's easy to get depressed watching Olympians be great.

That's when you have to remind yourself that, "Oh, that's right, I decided to have a LIFE instead." No one woke up an excellent gymnast. These kids have trained for hours every day for years on end. Some of them have been born and bred into champions, and it's the only life they've ever known. I'm sure it's pretty awesome to be a gold medalist. But you know what else is awesome? Knowing what happened on "Big Brother" last night. Knowing what a cheeseburger tastes like. Having a cushion of your couch with a perfect indentation of your butt in it. I'll never be an Olympian, but I've also never had the displeasure of getting up before dawn to train for ANYTHING, and that's a win as far as I'm concerned.

It's fun to root for Team USA as they swim, run, and tumble their way to victory, but if you're only paying attention to the popular sports, you're robbing yourself of the best Olympic fun: the weird sports that only make their way to our TV sets at 3 a.m. when normal people have gone to bed.

For instance, there's rugby, the sport for folks who just don't think football's violent enough. Rugby's making its first Olympic appearance since 1924, and I can't get enough of it. I also have NO idea what I'm watching, but who cares. It's kind of like football, in that there's a ball and the players have feet. But it's also kind of like a complicated game of hot potato, because players are constantly making lateral or reverse passes to one another.

But then once you think you know what's going on, the announcer says the word "scrum" and suddenly everybody dogpiles around the ball in a brutal orgy of confusion until the ball shoots out under somebody's legs and play resumes. There's tackles just like football -- except in football, the players wear protective gear and helmets. Rugby equipment appears to involve little more than a t-shirt and socks. Hop online and watch any of the kajillion videos labelled "Awesome rugby hits!" and you'll routinely see dudes bloodied and unconscious. This is not a sport for people who enjoy keeping their teeth.

When I think of "handball," I think of the game you play on racquetball courts when you forget your racquet. Or perhaps the setting you put your 70's Pong game on when you're playing solo. But no, team handball is a far more satisfying sport, though "ballsball" would be a more appropriate name.

Imagine hockey, but without the sticks or puck. Instead, players run around and toss what looks to be a malnourished soccer ball. Using keep-away style passes, players advance the ball down a small court. Once in range, one player will eventually leap up and whip the ball at lightning speed in the immediate direction of the goalie's nether-regions. Occasionally, the ball will miss their genitals and instead land in the net, earning a point. The winning team is the one with the most points or the goalie still capable of bearing children upon conclusion of the match. I'd say this game is nutty, but that seems way too obvious a joke.

So when you watch these last few days of the Olympics, don't just stick to primetime coverage. Hop onto NBC's website and catch some rugby and handball. Check out the excitement of the dressage competition or the thrill of competitive trampoline. As for me, I'm headed to the basement to do some training. On the off chance that Guitar Hero becomes a recognized sport in 2020, I want to be ready.
Posted by -shane- at 9/23/2016