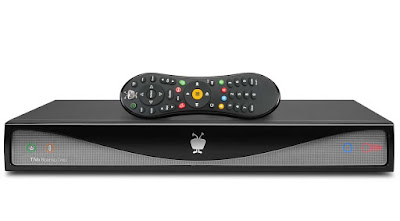 I'd love to write a normal column this week. What do normal columnists write about this time of year? Something about the weather, the floods. Gardening. Spring break. Any slice-of-life tale of whatever people do when they're allowed to leave their living rooms.

Not me. I can't write about that stuff. I'm too busy being kidnapped. Or man-napped. Or whatever they call it when a grown adult is kept against his will. Folks, I'm being held hostage by my TiVo.

When our local TV cable carrier announced their partnership with TiVo to replace our DVR boxes, I was excited. A means to record must-see shows is essential when you're a spry, on-the-go whipper-snapper such as myself. Cough.

Okay, maybe I'm not snapping any whips per se. And maybe the REAL reason I have a DVR is to record one show while I watch another. But still, it's important. I use my DVR like crazy.

If television is an addiction, then TiVo is my pusherman. TiVo boxes do more than record shows. Let's say I want to record an episode of Big Bang Theory. TiVo says, "Sure, I'll record that. Do you want me to record EVERY episode I can find?" Well, gosh, TiVo, if you insist. And then it'll go, "Hey, if you like Big Bang Theory, here's a list of ten other shows that you might like, too. Shall I record THOSE, too?" Umm, I guess. And even if you say no, half the time it records anyways and ends up in a tempting folder called "Suggestions Recorded for You."

TiVo is constantly on the hunt for shows I might like. It's probably recording something right now. But that's okay, because TiVo boxes have lots of room. Mine can hold somewhere around 300 hours worth of shows. THREE HUNDRED HOURS! Just imagine how long it would take to fill that much space.

My TiVo is currently sitting at 99% of its storage capacity. Every night, I come home to a warning message that programs I've recorded are "GOING AWAY SOON" to make room for other shows I need to record. Just when I think I'm making progress whittling down my queue, TiVo records a bunch more stupid shows it insists I watch.

- 87 episodes of a "reality" show where a psychic and a cop investigate ghosts. The cop interviews residents while the psychic makes crazy faces and goes, "Ooh, this ghost is MAD!" At the end of every episode, they instruct the haunted homeowners how to rid themselves of the dearly departed, which usually consists of a warlock and/or priest blessing the house, performing a cleansing ritual, and doing the spiritual hokey pokey. Obviously its an important and thought-provoking documentary series that is in no way a giant load of hooey.

- 23 episodes of a DIFFERENT reality show wherein the same psychic and the same cop go BACK to the same locations to see if they're any more or less haunted than the last time. I only wish I was kidding.

- 7 episodes of "Kindred Spirits," wherein a couple of seemingly earnest ghost hunters don't always find too much. It's probably the most believable and enjoyable paranormal show out there. It's also kinda boring. But it needs to be watched because they occasionally employ the services of psychic Chip Coffey, who is the greatest television personality this side of Charles Nelson Reilly.

- 6 episodes of "Finding Bigfoot" that I haven't gotten around to watching. They stopped making this show two years ago, and I can only presume its because they found Bigfoot and accomplished their mission. No spoilers please.

- 11 episodes of "Live P.D.," which is exactly like the old show "Cops" except that each episode is roughly half a day long. It's mostly just police arresting drunken morons. I'd like to think I'm above the shameless exploitation of humanity like this, but it's pretty much the best thing ever.

So enjoy your spring, Quad Cities. If you need me, I'll be in my living room literally watching my intelligence slowly get sucked away. I just hope TiVo isn't gathering information about its users viewing habits to sell the networks. If HBO premieres a show this fall wherein a school bus filled with singing psychics chase imaginary monsters while being pursued by police, I'm afraid you'll know who to blame.
Posted by -shane- at 4/05/2019