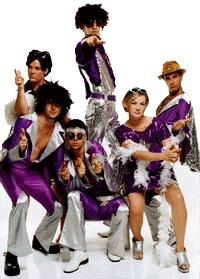 So this weekend it's Travoltas madness in the District. Come swim through the 103 degree heat to hear your disco favorites for the billionth time.

Honestly, though, there's no denying it -- The Travoltas put on one hell of a great show. If you haven't been yet, you basically must not live in the Quad Cities. If you HAVE been, you know what I'm talking about.

I'M opening for them on Saturday. That's right, kids, join me as I become the Quad Cities' version of Disco Stu for one night and one night only -- this Saturday night, DJ'ing a set of all disco, funk, and horribly kitsch music -- opening for the legendary (at least legendary in Rock Island and small corners of Canada) Travoltas.

It shall prove to be a night of full, unbridled hedonistic disco madness. Either that or it'll just be hot, humid, and smelly. Either way, I go on around 8 and take DJ duties on the main stage up until the Travoltas take over around 10:30-ish or so. It's hip, it's happening... it's Ribco, baby. Be there.
Posted by -shane- at 7/21/2005