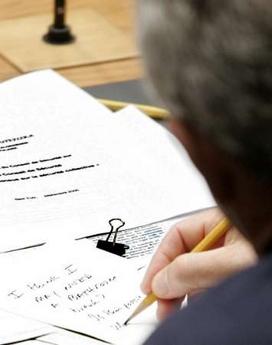 ...But not everybody has to ask Condoleeza Rice if it's okay first.

This would be our fearless leader, needing to relieve himself in the middle of the United Nations session yesterday.

I'm not kidding. Here's the caption that originally ran with this photo, courtesy of Reuters:

U.S. President George W. Bush writes a note to Secretary of State Condoleezza Rice during a Security Council meeting at the 2005 World Summit and 60th General Assembly of the United Nations in New York September 14, 2005. World leaders are exploring ways to revitalize the United Nations at a summit on Wednesday but their blueprint falls short of Secretary-General Kofi Annan's vision of freedom from want, persecution and war. REUTERS/Rick Wilking

Carefully look at the contents of said note.

"I think I may need a bathroom break? Is this possible" is what it says.

(1) What's with the usage of the question mark? "I think I may need a bathroom break?" Mr. President, that shouldn't be a question. You either have to doodie or you don't. It's never a "maybe" kinda issue.

(2) You are (as unbelievable as it sounds to us as it must to you) the elected leader of the free world. As such, you should not have to ask permission to use the pottie. In all due respect, Mr. President, your importance is such that, if you wanted to, you could whip it out right there in the assembly room and take a #1 on the heads of the delegation from Sierra Leone.
Posted by -shane- at 9/15/2005