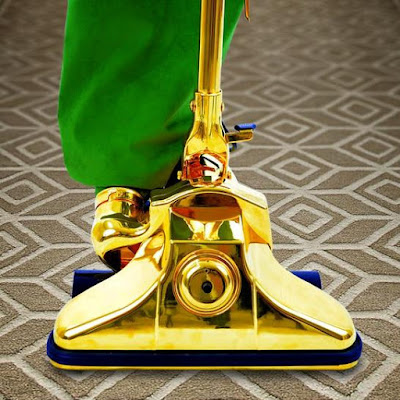 Throughout my many great adventures on this big blue marble, I've come to subscribe to just one universal truth about the human existence:

Well, maybe not you. You're reading this column, so you're okay in my book. And I suppose Ghandi and Mother Teresa and Nelson Mandela and Martin Luther King get a pass, too. But other than you and me and Mahatma and a few other rare exemptions to the rule, people are, by and large, quite awful. Accepting this is a great relief, because it means you're seldom disappointed when a person's true inner suckiness springs forth unexpectedly. Our world is populated by racists, homophobes, miscreants, malcontents, and Tom Cruises just waiting to shine. I don't care if you're a sandwich pitchman or a megalomaniac running for office, you're very likely destined to suck.

That's why I'm starting a semi-regular feature in this column that I like to call:

This week's winner? The woman in front of me at the grocery checkout the other day.

First off, let's just clear this up right away. Me at a grocery store is something of a rare sight to behold. After all, it hasn't been very long since I started using my kitchen for anything other than an empty pizza box storage facility. But in my ne'er-ending quest to finally grow up at age 44, I've been teaching myself to cook. Each Sunday, I pick a new recipe and give it the old college try. Or the old middle-aged try, as it were.

So there I was, standing in the checkout line with all the ingredients I needed and a cart full of other stuff I didn't. This week's recipe was something called "Island Pork" that I found online, and it was a good one because all I had to do was track down the ingredients, throw them all into a crock pot, and wait. That's my kind of cooking. The only problem was that it was already noon, and the recipe said my island pork had to cook for 6-8 hours. I didn't exactly fancy sampling the flavor of the islands at half past midnight, so I was in a rush to get home and get things crocking before it was too late.

I was going over the recipe in my head to make sure I had everything I needed when the woman in front of me suddenly started yelling.

"Wait, wait, WHAT?" she blurted out. "HOW much were those cherries?"

Prior to her outburst, I hadn't given this woman more than a momentary glance. She was on her side of the little divider stick and I was on mine, and that's about all the interpersonal relationship building I was up for that afternoon. But that didn't stop her from turning on me and going, "CAN YOU BELIEVE THIS?"

To which I should have replied, "Yes. Yes, I'll believe anything in a grocery store because I have no idea how much anything is supposed to cost. Milk could be $10 a drop for all I know. I'm kinda new at this place."

The woman was trying to buy a bag of fresh cherries, and apparently had a price in her mind of what these cherries should cost. The actual price of the cherries as the cashier rang them up was roughly double what she was expecting. And she was outraged.

How did I know?

"I AM OUTRAGED!" she yelled at the hapless cashier, who was clearly still a high-schooler. "This can't be right! You need to check on these!"

You know what that meant. I stood there while the poor cashier had to get on the microphone to summon an even more hapless kid to run to the cherry section and confirm that, yes, the price was correct.

"WHAT?" she said with the astonishment of someone discovering the Earth was round. "I need you to explain to me RIGHT NOW why the price of my cherries has doubled in the past week!"

"Of COURSE you have no idea. I bet that's what you say to every shopper as you gouge them for their last cent. Well, FORGET IT! I WILL NOT PAY FOR THESE CHERRIES! GOOD DAY!" And then she stomped off, which meant the cashier had to stand there for the next five minutes and void out this woman's entire cart of purchases.

So cheers to you, random woman of OUTRAGE! Here's what's earned you a Hoover Award:

(1) First off, you're buying fresh cherries. Let me be clear: the only acceptable use in this world for cherries is when they're followed by the words "pie," "cobbler," or whatever magical process makes them maraschino'ed. Fresh cherries taste like Robitussin. Stop it.

(2) They're "your" cherries? And you know that the price has doubled since last week? Does that mean you've got a bag-a-week cherry habit? Just say no, lady.

(3) I don't know much about grocery shopping, but I'm fairly confident that there's no secret price gouging conspiracy diabolically plotted to take advantage of innocent cherry addicts. Hop on the internet and read up on the drought in California and flooding in Pennsylvania. Cherry crops are low this year and prices are up as a result. If there IS a conspiracy, Ma Nature's the ringleader.

(4) The one person who's probably NOT a key player in the price-hiking cherry cabal is this poor high schooler working the register. Were you suddenly expecting her to scowl and say, "Curses! And we woulda got away with it if it wasn't for your keen attention to detail! Drat!"

(5) Even if you had a perfectly good rationale for your hysterics (which you didn't,) no one has ever actually ended a tantrum (outside of movies and TV) by spitefully yelling, "GOOD DAY!" That's SO sucky it almost comes back around to being awesome again.

(6) Above all other crimes of suckosity, you just set my Island Pork back by a good fifteen minutes. I, for one, was OUTRAGED!

So congratulations on your award, random shopper. I would've put a cherry on top if they weren't so pricey.
Posted by -shane- at 9/29/2015