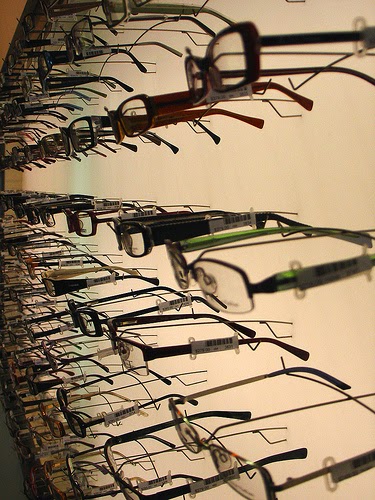 If you happened to catch my column last week, you'll know that I was recently given some bad news. Despite widely-held public opinion and my own personal belief system, it turns out that I am (sniffle) NOT perfect.

After a week of working closely here at the paper with our legal notices and their notoriously itty bitty print, I was stricken with headaches, a twitch in my right eye, and even got a bit wobbly when I stopped staring at a computer screen and walked out into the sun. A quick trip to the optometrist confirmed my fears: I needed glasses. Worse yet, the doc told me that, and I quote, "once you get into your forties, most people start having some vision problems."

So that's it, then. I'm not only imperfect, I'm imperfect and OLD. I've gone from having near-perfect vision to being near-sighted, astigmatic, and elderly. Quad Cities, your hero has fallen.

Since I hadn't visited an eye doctor since Reagan was in office, I knew fully well that my impaired vision was likely a long time in the making and had absolutely nothing to do with my week-long assignment at the legals desk. Still, it made for a good scapegoat while I was blurrily looking for something to be mad at. I left the exam room grumbly, agitated, and wondering just how weird bi-focals would be. That's when I looked up (with my one good eye, apparently) and spotted none other than this paper's managing editor waiting in the optometrist's lobby. I was in attack mode before he could even say a friendly hello.

"J'accuse!" I exclaimed. "THIS is what happens when you put me on the legals desk for a week! I'm RUINED!" Much awkward laughter ensued.

Of course, later I realized that our managing editor had absolutely nothing to do with my temporary assignment on the legals desk and probably didn't even have a clue that I'd been covering there for the past week. As far as he was concerned, he was just taking his wife to the eye doctor when I suddenly leapt out of a door babbling like a crazy person.

The good news is that crazy babbling and awkward laughter is my standard go-to behavior, so I don't think he was especially taken aback -- and a week later, I still appear to be gainfully employed, so I must not have been any more idiotic than usual.

But speaking of nervous laughter, my diagnosis was only the START of my problems.

"Ahem," interrupted the patient optician. "You need to pick out some frames."

Uh oh. If there's one thing my friends can attest to, it's that I should never be in charge of my own fashion choices. My oft-worn and cherished Greek fisherman's cap alone is proof of this, not to mention the back corner of my closet known as "the rayon graveyard." Picking out glasses is far too important a task for a fashion amateur such as myself. This was my opportunity to look distinguished, dignified, and add a little bit of class to my daily ensemble. If left in MY hands, I guarantee I'd walk out of that office looking like 1978 Elton John.

"I'm an idiot at this kinda stuff," I fessed. "Not to mention, apparently I'm blind. Are you good at this sorta thing?"

Thankfully, she was -- and I needed the help. We walked over to the display cases where I was greeted by about 1000 different frames that all looked perfectly identical to me. Okay, some were slightly different colors and slightly different widths, but there's only so many things you can do with a pair of glass rectangles, right? I had no idea where to turn first.

So for fun, I turned to the designer wall, full of frames that looked just like all the others, except for the price tags, which were considerably weightier. The good news is that I now know what a $400 pair of frames look like. The bad news is that they look EXACTLY like the $50 ones.

This is what I don't get about high fashion. Argue all you want, but the way I see it, most people wear designer fashion for one reason only: to show the rest of us schlubs that they can afford designer fashion. If I'm going to spend a zillion dollars on a pair of Prada glasses, they'd better glow in the dark with LED lights that say "PRADA" across the lenses. Instead, Prada glasses come with a Prada logo so tiny that you'd need another pair of Prada glasses to be able to see it. No thanks. Besides, spending $400 on a pair of frames is karmic insurance that I'd sit on them by the end of the day.

My optician was awesome. I was afraid that every pair I tried on, she'd go, "WOW! Those are fabulous! You should buy them!" After all, sales IS her job. Instead, I tried on the first pair, looked at her, and she immediately went, "Eww. No. Take those off. Yuck." For once in my life, I appreciated the brutal honesty. My optical fashion show carried on for about thirty more frames that ranged from "eww" to "ehh" to "okay" to "awesome!"

In the end, I chose a fairly innocuous pair of thin brown frames -- so thin, in fact, that you can barely see them. It basically looks like two small lenses just floating on my face. And I like them. They don't exactly make me look like an intellectual genius, but they don't make me look like Dorky McFourEyes either.

It wasn't until later that I realized exactly what I was doing to myself. Glasses? Check. Ugly yet beloved Greek fisherman's cap? Check. Ever-expanding stomach? Check. It's official -- I am one unkempt grey beard away from becoming George RR Martin: novelist, screenwriter, and murderer of beloved characters weekly on "Game of Thrones."

Not exactly the look I was going for. Then again, he's a kajillionaire -- if I have half his luck, maybe I can afford a pair of those Prada frames one day. I might be imperfect, I might be old, I might be well on my way to looking like the nerdiest fantasy writer of our generation -- but at least I'll be better than the rest of the schlubs.