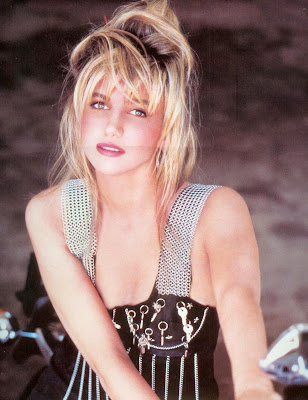 I really thought this week's column would write itself.

For a neurotic like me who thrives on self-deprecation, nothing could be better column fodder than opening my mailbox to find an invite to my 25-year high school class reunion. The prospect of thrusting myself back into that throng was simultaneously terrifying and exciting. And when I got the offer to DJ the thing, it upped the ante to an altogether new level of terrexcitement.

You see, a long time ago in a Galesburg far away, I was a (gasp) nerd. Uncoordinated, socially awkward, desperate to fit in, last picked in gym class, and pretty much the kryptonite to anything that might ever be considered cool. I'm pretty much that same guy today, just with fewer dodgeballs being chucked at my privates on a routine basis.

I was never in with the in crowd. Don't cry for me, though, Quad Cities -- it wasn't all bad. Once the cool kids learned that I could DJ, I got my fair share of party invites. And besides, I had my ragtag group of fellow outcast friends who I wouldn't trade for the world, and we had our fair share of fun. I had four really close friends in my graduating class, and if all of them were to show up, this reunion would be epic.

Which means that they didn't. Mark couldn't get the day off work from paramedic duties in Kansas City. Brian's wife was on a trip to Japan and left him in California with the baby. Bruce was in Chicago, probably hanging out with Cyndi Lauper or Blondie or some other awesome 80s hero that he strangely always seems to meet (but at least I'm not jealous except that I am.) Will, who's now a teacher down in Burlington, DID show up with his wife, and it was fantastic to catch up, especially since we'd fallen out of touch over the years.

Still, these were not good odds. Me, my date, Will, his wife, and a sea of people who really didn't care a whole lot for us in 1988, let alone now. This could be a serious soap opera moment. Would we be ostracized? Would the jocks still be the jocks and the nerds still be the nerds? Would old rivalries flare up? Did anyone bring a dodgeball?? No matter how it played out, it would make for an excellent column.

Except that it didn't. It was, to sum up, excruciatingly uneventful and pleasant. What I thought would be a ball of stress turned into a fun, low-key night with old friends. Will and I had a blast. I got to catch up with some folks I'd completely forgotten about. Everyone was nice, no one was an embarassment, and it was a decent night out. The real star of the show was the food. Two of my classmates opened up a barbecue joint in town, and no joke, it's the best BBQ I've ever eaten (and I've eaten my share.) Free plug ahoy: C&R's Smokehouse in Galesburg -- it's worth the drive.

My favorite part of the evening, though, was just getting the opportunity to dust off some 80's records that I'm embarassed to love. I learned how to mix in the era of "You Spin Me Round" and "Oh Sheila" and it was great to give those old tracks some legs again. And above all else, I finally had the chance to once again loudly and proudly rock some Debbie Gibson.

I took a lot of heat in high school for my Debbie Gibson obsession. After all, I was the guy who wasn't afraid to play the Sex Pistols at school dances. My favorite bands at the time were The Cure, Depeche Mode, New Order, and the sorts of music you're supposed to listen to while you wear black and watch each other's ankh necklaces glimmer in the candlelight. But goth tendencies or no, I've always had a penchant for good dance tunes -- and when I first heard Debbie Gibson's "Only In My Dreams," I declared it one of the best songs of all time ever.

Of course, my hipster alterna-goth friends gave me insane amounts of grief, but I didn't care. I'll defend that song as long as I live. None of her other singles were ever that catchy, but I remained a fan (mostly just to spite my friends.) I covered a wall of my room with Debbie Gibson posters and a Debbie Gibson calendar and held my ground. To this day, I've bought every piece of music she's ever released.

So when I played "Only In My Dreams" at the class reunion, it hardly surprised anyone. But when I got a Facebook message a few days later from one of my old classmates, the news surprised ME. Debbie's coming to Chicago, and soon. My first celebrity crush is coming to a convention called The Hollywood Show, where -- for a nominal fee, of course -- you can meet and greet your favorite celebrities. Provided, of course, that your favorite celebrities include any of the following:

Debbie Gibson, Kristy and Jimmy McNichol, Mackenzie Phillips, Barbara Eden, Ken Kercheval, Bill Daily, Tippi Hedron, 2 of My Three Sons, the kid who got his tongue stuck to the lamppost in "A Christmas Story," The Landers Sisters, Greg "BJ and the Bear" Evigan, the guy who designed the "I Dream of Jeannie" bottle, Dennis the Menace, and a reunion of the film cast of "Jesus Christ Superstar." I know, I know -- so much starpower under ONE roof, right?

Even I had to admit that Debbie's star had faded of late, but I didn't realize it had reached twenty-bucks-for-an-autograph sorta levels. After all, we're talking about the star of "Giant Shark vs. Mega Octopus" AND "Mega Python vs. Gatoroid." Surely she deserves a better fate than posing for photos with rabid Greg Evigan fans, no?

I'm not one to be immune to the lure of fame. Part of me still wants to write the Great American Novel and have arenas full of people come to see me DJ. I'd love to have a home in the Hamptons where I could throw lavish parties with my executive chef and have an executive driver to make sure Lindsay Lohan gets home okay.

But if the flipside of fame means that twenty years after THAT, I'd be shuffling from one convention center to the next, charging people forty bucks for the privilege of meeting me while sitting at a table alongside the "Gangnam Style" guy, the "Charlie bit me!" kid, and, heck, probably STILL Greg Evigan? Maybe fame isn't so awesome after all.

I was worried that my class reunion would make me feel old and ostracized. Instead, it made me feel blessedly like a normal joe. I didn't feel OLD until I learned that my favorite teen idol now hocks her photos for forty bucks. But a part of me will always have a soft spot for Debbie Gibson, and I hope she revitalizes her career and has a wonderful second act. Just don't let it start for another couple weeks -- I don't want her autograph price to go up just yet.
Posted by -shane- at 10/23/2013