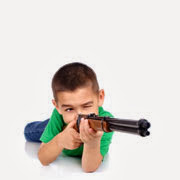 I tend to avoid hot-button topics like the plague in this column.

That's not to say I don't have opinions. If you'll let me, I'll talk your ears off about politics, gay marriage, violent video games, or whatever you fancy. Just not in the newspaper.

We've already got an editorial page full of folks WAY smarter and far more qualified than myself to talk about the ways of the world. If you wanna read about stuff like that, go there. If you want funny cat stories, I'm your guy. Besides, I'm shallow and pathetic and crave your undying affection at all costs. I don't want to say the wrong thing and lose any of my precious fanbase. I'd rather stick with my trusted rule of thumb where the only people I stand a chance of upsetting are dog lovers and Tom Cruise fans.

That said, occasionally something comes along that inspires me to take a stand for what I believe in. And this week, that something was the taste of cold steel.

It was Thursday night and I was heading home from an especially exhausting day at the office. My brain was fried and I was running on auto-pilot. It was only by a last-minute burst of synapses that I remembered I was dangerously low on toilet paper at home, so I altered my path to head for the nearest drugstore.

I reached a stoplight just as it turned red. At the time, There I sat, sitting first at the light to go straight, when a car pulled up alongside me in the left-hand turn lane.

When it comes to cars, I know precisely: nothing. Here's a list of ones I could pick out on the street: VW Beetles, PT Cruisers, Hummers, Mini-Coopers, and the Batmobile. Beyond that, as far as I'm concerned, all you other people drive the same vehicle.

But this car was different. It was fancy. It was dark blue and shiny and had tinted windows and a spoiler and looked like the sort of thing that people would inexplicably pay big money to see Vin Diesel drive on the big screen. It was a head-turner, and I was a head-turnee.

So there I was, brain in neutral, waiting for the light to turn green, checking out this fancy car with its fancy tinted windows. That's when the fancy tinted window on the rear passenger side opened a crack... and out popped the double barrel of a shotgun, pointed directly at my head.

There are times in life when moments occur that allow you to find out what kind of a person you REALLY are, and this was one of them. A million thoughts could have coursed through my brain at that moment. I could have been a hero and thrown my door open, jumped out, opened the back door of the fancy car and wrestled the gunman to the ground. At the very least, I expected to have my life flash before my eyes and reflect even momentarily on the people and places I love.

Instead, here was the only thought my brain provided: "Well, this just figures." I'd been in whiny mode all week. Whining about long work days, whining about money, whining about friends, and here I was, potentially my very last thought on Earth and using it to whine about dying. I suppose I am nothing if not consistent.

If you've ever wanted a solid wake-up call when you're zoning out, try having a gun pointed at your face. I didn't know if my would-be assassin was a random stranger or a well-planned attack by a legion of vengeful Tom Cruise fans -- all I knew was that I didn't want my legacy to be police searching my house in vain for clues about my demise. "Everything looks normal, Captain, except for the fact that he was totally and completely out of toilet paper."

So I did the only thing I could think of, which was also a pretty stupid thing: I gunned it. I threw the car in gear and went into the intersection blaring my horn. Thankfully, the driver of the oncoming car was less brain-dead than me and managed to swerve to a stop before t-boning my passenger side. And, as THAT driver was justifiably flipping me the bird, I turned back to the fancy car in just enough time to see the rear window all the way down, a small child holding what was clearly a plastic toy gun, and the driver of that car pointing and laughing hysterically like it was the funniest thing in the world. I, meanwhile, considered it a personal triumph that I hadn't wet myself.

I fumbled for my phone to call the cops, but it was pointless. I didn't get the guy's plate number, he was already halfway to Moline, and what could I have said? "The car? It was, umm, blue. And shiny. The driver may have been Vin Diesel." Instead, I continued to the drugstore parking lot while having a nervous breakdown.

I'm not anti-gun. It's a freedom afforded by our constitution, and I get it. I grew up with a few in the home (although I think my dad would probably die rather than point any of them towards anything with a heartbeat.) I have an uncle who keeps a ready bag by his door for the day his militia comes calling. Skeet shooting looks like great fun. I just know guns aren't for me. I can barely operate a remote control. If I owned a gun, I'd shoot myself in the leg in no time.

What I AM anti-, though, is the prevalence of guns in our culture. I certainly don't like realistic-looking ones being pointed my way, even if they're toys. And I really don't like that my irresponsible response was to dart into traffic and potentially cause someone ELSE to get hurt.

Instead, we'll just all have a laugh at how a 7-year-old with a plastic gun almost made me pee myself.