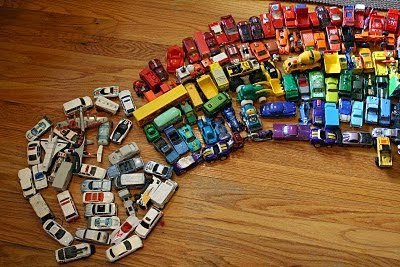 After 42 years, I finally thought I had the hang of this only child thing. Whenever I tell people that I grew up without brothers or sisters in a country house miles away from any other kid, I'm amazed that the phrase I hear the most is, "Oh, I feel so sorry for you!" Those people are nuts.

As far as I'm concerned, I had it good. Being an only child rocks. I had all the attention, all the love, and all the presents. I never had to share. I never had to watch someone else's favorite TV show. I've never had a wedgie, wet willie, or purple nurple in my life.

Decades later, it's just as awesome. MY house is the only one that gets dad's full home improvement attention. I have no brothers-in-laws or sisters-in-laws that I have to pretend to like. And I STILL get all the presents. I wouldn't trade my upbringing for anyone else's, ever.

I think people must assume that I spent my formative years sitting in a lonely room watching paint dry. Not true -- mostly because I've never painted anything in my life except for Dungeons & Dragons miniatures, and that paint dries QUICK. I didn't have any siblings or any friends in the neighborhood, but I didn't need that nonsense. I had my imagination.

I am told that I had an imaginary friend, and his name was Mervy. I'm not really sure what caused our friendship to wane, but it must have been one evil spat, since I've cast all memory of the poor fellow from my brain. But if you really want to see me squirm, put me in the same room as my mom and ask her about Mervy. She remembers Mervy like they were old college buddies. I have zero recollection, and I'm the one who made him up.

I do, however, remember the cars. When I was a kid, I had a fetish for Hot Wheels and Matchbox cars. Some people collect those cars and leave them in their packaging in hopes that the price will inflate and they'll one day be able to retire thanks to a plastic Corvette. Not me. I had those suckers out of the box before I even got home, and I'd play with them until they were chipped, beaten, and tireless. Each one had a distinct personality. And I don't mean I came up with little imaginary drivers for each of them. No, it was the cars themselves that had personalities -- and who needed siblings when you had a drawer full of anthropomorphic cars?

My cars had better things to do than race down a track. No, not when there were crimes to be solved. That's right, my cars were detectives. Well, when they weren't being superheroes. Or hypnotists. Quite often, this mean mini-van would steal Princess Datsun and it would take a ragtag team of family-style sedans to save her. And so many of my childhood memories may have floated off into the mist, but I will ALWAYS remember the summer when, against all odds and wagers, all 70 of my Matchbox cars qualified for Wimbledon.

The point is, I was never bored. There's no real down side to being an only child -- well, except for the small problem that I never learned how to live with anyone else ever.

I've had blessedly few roommates over the years, and each time it's ended in tears. My freshman year roommate was a high school friend who ate all my food and slept with his eyes open. My sophomore year I lived in a triple with two of my best friends. By the end of that year, one of them had hurled a bottle of Palmolive at my skull and the other hasn't spoken to me since. My junior year roommate was an exchange student from Greece who ground his teeth so loud you'd have thought a wild badger was amok in our room.

Cohabitation has been the death knell to every relationship I've ever had. That's when love takes a back seat to pet peeves. She might be my soul mate, but it doesn't change the fact that I HATE THE WAY SHE BREATHES. STOP BREATHING LIKE THAT. IN... OUT... IN... OUT... YOU'RE DRIVING ME CRAZY, what with all the free air you're just imbibing willy-nilly and this irrational thought that you get to have HALF of MY bed. Just... just... honey, we need to talk.

I spent almost two decades since college in an apartment to myself, and now I've got a whole house to myself. Last week, I played host to one of my best friends and his wife, who were in town on a visit from Japan. For 8 days and nights, they stayed right here at the International House of Shane, and it only took about 2 of those 8 days before I kinda wanted to hurt somebody.

It wasn't their fault in the slightest. I love both of them dearly, I'm so happy they came for a visit, and I can't wait until the next time they do it again. I just had to tell myself things like, "Hey, don't get irrationally mad about the fact that you can't walk naked out of the shower into the closet to pick out clothes. It's no big deal." And who cares that they always left the toilet seat cover down or accidentally let the sloppy joe leftovers sit out overnight or left congealed bacon grease sit on my stove all week or inexplicably used 14 rolls of toilet paper in 8 days? Not this guy. My friends are awesome and we all had a blast.

So when my friend Stuart needed a place to stay when he comes next month to run the Quad City Marathon, I gladly offered my house. And when my friend Kelly called to say she's coming next month on a business trip, I insisted she stay at my place. Because I'm an awesome friend and I love having houseguests and I am in no way a spoiled, self-centered isolationist forever scarred by my inexperience at sharing and cohabitation. I am a well-rounded only child who's perfectly fine with houseguests.

Mervy's the one who hates them.